TigerVPN is fast, reliable, and an incredibly good value. TigerVPN should be your weapon of choice if you need to run different VPN connections simultaneously.

TigerVPN does exceedingly well on speed and reliability.

It’s 300 servers, which are spread over 63 locations in 43 countries, are coded in-house to ensure optimum performance at all times. The servers are coded to have the lowest latency possible; and include unlimited bandwidth, no speed throttling, and 99.99% uptime.

As a nice surprise, the free-tier plans benefit from the same amount of bandwidth as paid plans. What's unique is that all paid plans come with access to a gigabit network of servers. This network of servers supports transfers at speeds of up to 1 gigabit (1,000 megabits) per second - perfect if you’re an avid gamer or a film buff.

Unlike some other VPNs we’ve reviewed, TigerVPN also supports torrenting; and has dedicated servers purposely coded to ensure a fast and smooth downloading experience. 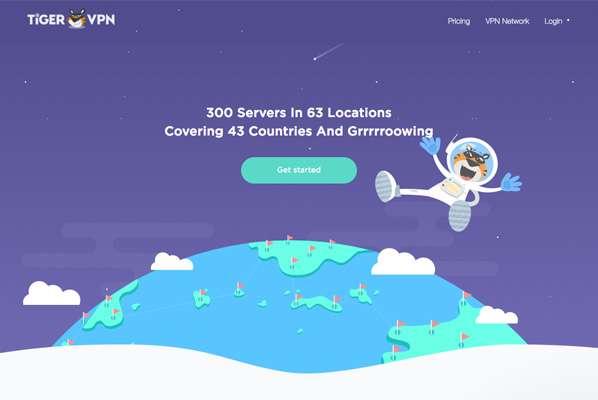 TigerVPN has four plans in total, including a free one. All of these plans come with access to servers in 43 countries and a minimum of two simultaneous connections.

Understandably, the free plan is limited to 500 megabytes of bandwidth and doesn’t include access to TigerVPN’s gigabit servers. All the other plans, however, come with unlimited bandwidth, unlimited server switching and up to 5 simultaneous connections on the Hero Tiger plan.

The service’s most interesting features, however, are StickyPassword Premium and Shimo VPN Manager - which are available entirely free of charge on the Hero Tiger plan.

StickyPassword Premium is a password manager which allows you to store all of your passwords securely in one place. Shimo VPN Manager, on the other hand, is a security protocol manager which allows you to connect to the Internet using different VPN connections simultaneously - great if you need to use different VPN connections for different purposes at the same time.

That said, Shimo VPN Manager only works on Mac. In addition, TigerVPN also lacks some of the more advanced functionality we’ve seen on other VPN services. For instance, it lacks a killswitch, which terminates selected apps if the VPN disconnects. The absence of these features, while not a deal-breaker, means TigerVPN doesn’t get full marks in this category.

TigerVPN works on all major platforms, with dedicated apps for Windows, Mac, iOS and Android. You can also install it manually on Linux.

The service allows up to five simultaneous connections on the Hero Tiger plan - which is the cheapest plan available. This should more than enough to protect all of your devices, as you’re unlikely to be running five of them concurrently.

In any event, should you wish to cater for a larger network, you can also install the software on your router. Any device connected to your router would then be automatically connected to the VPN too, effectively bypassing the simultaneous connection limit. TigerVPN supports any router with DD-WRT firmware, Linksys E2000, and Raspberry Pi.

On the downside, while TigerVPN has a respectable 300 servers in 43 countries, but other VPNs we reviewed had as many as 900 servers in more than 100 countries. What’s more, only shared IP addresses are available. While these are better for anonymity, you may prefer a dedicated IP address if you’re looking for a greater degree of control on how you appear online.

While TigerVPN prides itself on its “real customer support,” this is somewhat misleading, because it isn’t actually available live. If you want to get in touch, you’ll need to open a support ticket or else use social media. Unfortunately, based on what we’ve seen, their social media accounts aren’t particularly active, so we cannot really judge the effectiveness of using this channel to communicate with customer support.

There’s also a knowledge-base on the website. However, this could also do with some improvement. Most of the information you’ll find on site is fairly dry and basic; and we’ve found some of the instructions to lack clarity.

The knowledge-base also has a noticeable amount of grammatical and spelling errors. Of course, in terms of how helpful the information actually is, this is neither here nor there. That said, it shows a lack of attention to detail which made us wonder about what else they might have missed.

All in all, we were rather disappointed by how TigerVPN fared in this category, given that it did so well in other areas. In particular, this makes TigerVPN unsuitable if you’re new to VPN or not particularly tech-savvy. It may not be such a big issue, however, if you’re an experienced user or don’t mind doing your own research. 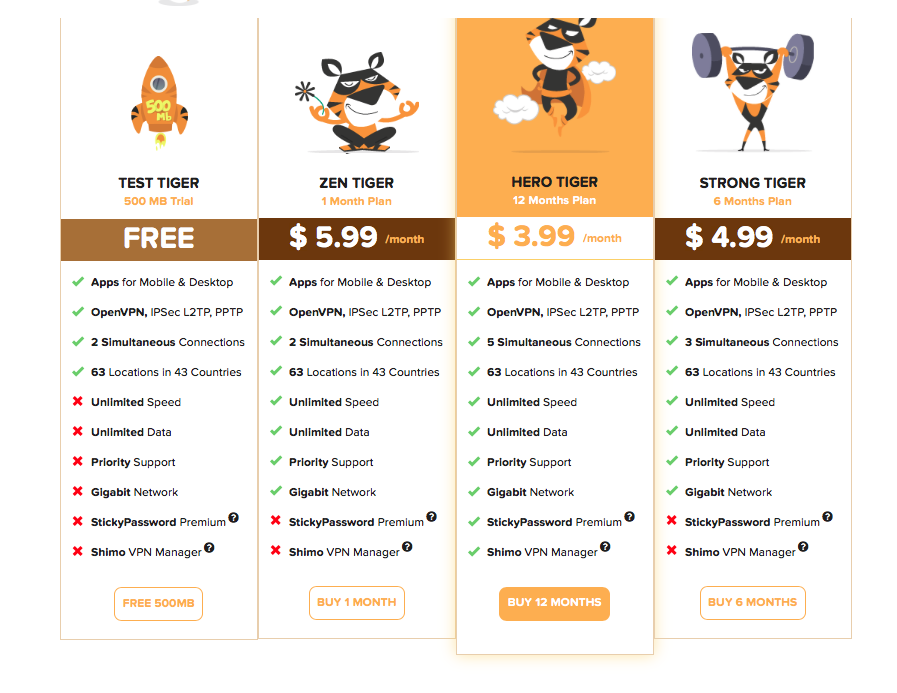 Like most other VPN services we reviewed, TigerVPN gets progressively cheaper the more months you pay for upfront.

A month-to-month plan - called Zen Tiger - costs $5.99. A six-month plan, known as Strong Tiger, costs $4.99 a month. A one-year subscription - called Hero Tiger - costs $3.99. Compared to other VPNs we reviewed, this is on the cheaper end of the spectrum.

There’s also a further twist, though. The most unique features, password manager and VPN protocol manager, are only available on Hero Tiger. This means that, essentially, you’re getting free additional features on what also happens to be the cheapest available plan. Frankly, it’s hard to argue with such an incredibly good deal.

You can also try a free plan indefinitely by signing up to the Test Tiger.

Test Tiger supports all four security protocols available on the other plans and gives you access to servers in all 43 countries - albeit not to the fastest ones on the network. However, you’ll be limited to 500 megabytes of bandwidth a month. While you won’t be doing any binge-watching on this kind of plan, it’s nonetheless one of the better trials we’ve seen; and it’s free for as long as you like.

Overall, TigerVPN is an excellent VPN. While the knowledge-base could do with some improvement, it’s fast, reliable and works on all major platforms. And the free VPN manager makes it ideal if you need to connect to different VPN networks simultaneously.