Perimeter 81 is a VPN solution for businesses from the team behind SaferVPN. Its software-based VPN products let companies set their employees up with secure remote access across an unlimited number of locations and devices. Each authorized employee receives a link to download a single-click VPN client app to their devices. The service is scalable, making it a good choice for growing businesses 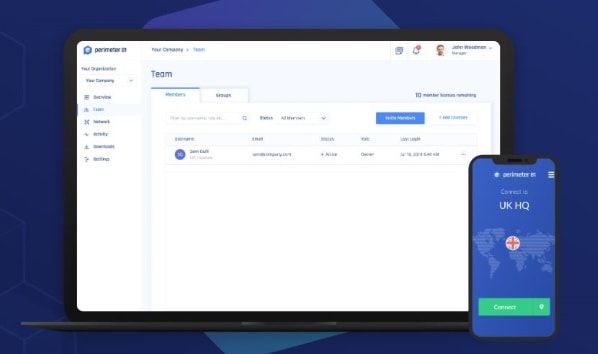 Perimeter81 At A Glance

Best For: Businesses that want to deploy a modern alternative to traditional corporate VPN systems

Location: Over 700 servers in more than 36 locations worldwide

Netflix: Perimeter81 is not intended for private users, but some servers can access Netflix

Number of Devices: Client applications are available for Mac, Windows, Android, and iOS. Users can also configure connections from Linux computers or even set up a connection file on their network router.

The company does collect internal connection logs, which are intended to be used by system administrators at the client. This log is also available via an Activity API which provides a complete breakdown of all administrative and infrastructure changes on the account.

The company presumably has access to these itself but in general is not believed to engage in deliberate logging of user connection activity.

As you’d expect of a product developed by cybersecurity software geeks, Perimeter 81 is all about security. Its corporate VPN solutions are designed so business can grant secure, remote access to all authorized employees—and keep everyone else out.

The Enterprise package is one of the most secure VPNs for business on the market, backed by a Software-Defined Perimeter (SPD). “What is an SPD?” we hear you ask. In Perimeter 81’s own words, “SDP allows organizations to restrict network access and provide customized, manageable and secure access to networked systems. Connectivity is based on the need-to-know-model, meaning each device and identity must be verified before being granted access to the network.” SDPs offer an even greater level of protection compared to traditional perimeter-based approach, and have been proved to stop all forms of network attacks, including distributed denial-of-service (DDOS), Man-in-the-Middle, Server Query, and Advanced Persistent Threat.

The Business package comes equipped with these features:

The Enterprise package offers all the features included in the Business package, as well as the following:

Perimeter81’s network is generally reported to be fast, as the company is focused on provisioning and maintaining top-quality servers for the needs of its corporate users.

The company shares a lot of server resources with SaferVPN, its sister company and tool for the consumer market.

All plans include a 30-day money-back guarantee.

Perimeter81 is designed to help remote workers securely connect to their companies’ networks without many of the traditional inconveniences of self-managed corporate VPNs.

Torrenting, and other P2P traffic sharing protocols, are not really intended use-cases. Unsurprisingly, Perimeter81’s terms of service actually lists torrenting (download/upload) as a grounds for denial of service.

Likewise, Netflix viewing is not an intended use-case for Perimeter81. That being said, we have seen reported that many of the US-based servers do, in fact, work to unblock Netflix. Given that Perimeter81 shares much infrastructure with SaferVPN, a non-business customer service, this is unsurprising.

Unlike other corporate VPN services, Perimeter 81 doesn’t require any hardware or manual configuration. It runs on software, is scalable, and integrates seamlessly with the cloud.

When you sign up with Perimeter 81, you get a full management platform where you can build, manage and secure your network. You can give network access to as many team members as you like, assign them to specific groups, and add and remove user permissions with a single click.

Every team member receives a link to download Perimeter 81’s single-click VPN client to their devices. Depending on your company’s security settings, you can have users log into their client using various third-party identity tools (such as Google), 2-step authentication, Duo Security, or SMS authentication.

Perimeter81 provides apps for iOS and Android. These allow users to connect through the Perimeter81 network from their handheld devices. The Android app features:

The Android and iOS apps can be downloaded from the Android Play Store and iTunes. Additionally, the company maintains a .pkg format installation file for directly installing to iOS.

How Does Perimeter81 Compare

As you’d expect of an enterprise VPN service, Perimeter offers all its clients dedicated 24/7 support for technical and billing inquiries. New customers can request a demo by filling out a short online form on Perimeter 81’s website and entering their name, email address, phone number, and some basic details about their company.

From the perspective of remote workers, Perimeter81 is much easier to use than a traditional corporate VPN model. Users simply have to put their organization’s connection credentials into the connection client.

From the system administrator’s perspective, being able to deploy a company-wide VPN network using Perimeter81 is also much easier than having to configure the same system from scratch. The tool makes it easy to create and assign connection policies, segregate users into groups, and create and enforce connection policies.

Primarily a service for creating a private VPN network for a distributed team of workers.

How does Perimeter81 differ from a consumer VPN?

The focus is on allowing administrators to create a network which can support granular security and access policy enforcement. Certain behaviors, such as torrenting, contravene the terms of service.

Can Ubuntu users use the network?

Yes. Although there is no GUI.

Perimeter 81 represents the next phase in VPN solutions, enabling businesses to maintain complete privacy and security over all their online activities—even when their employees are spread around the world. The service runs entirely on cloud-based software, is easy to learn and configure, and completely scalable.

Perimeter 81 belongs to Safer Social Ltd, the same company that operates SaferVPN. Israeli cybersecurity experts Amit Bareket and Sagi Gidali launched SaferVPN in 2013, and its success got them thinking about what they could do for businesses. In 2017 they raised $1 million from investors and trialed their corporate VPN service with tech companies in Silicon Valley and Israel. Perimeter 81 officially launched in 2018, and is now available to businesses around the world.