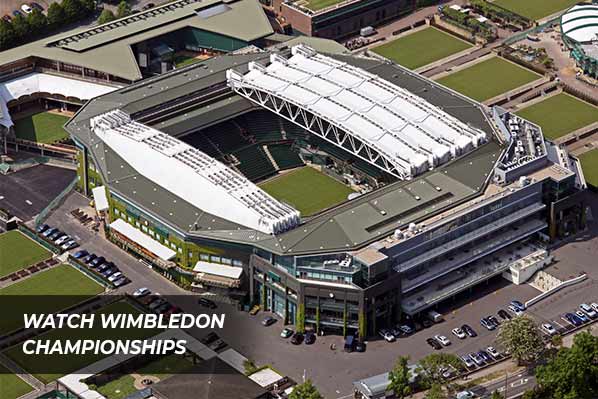 Green grass, strawberries and cream, and world-class tennis under a brilliant London sky. There’s more than enough reasons to love the tennis at Wimbledon, the most prestigious and storied of the 4 grand slam events. But how do you watch the tournament if it’s not broadcast in your area?

A (virtual private network) VPN can mask your computer’s location and allow you to access servers in locales where the matches will be shown, allowing you to stream all the action. Let’s break down the details.

Players to Watch in Wimbledon 2018

Like usual, all eyes will be on real life Wonder Woman Serena Williams as she vies for her 8th Wimbledon championship. A victory in Wimbledon would be Serena’s 24th Grand Slam title, tying Margaret Court for the most all-time. It would also come less than a year after Serena gave birth to her first child, a daughter who is (for now) unranked in women’s tennis.

All-time earnings leader Roger Federer will be gunning for a record ninth Wimbledon title, though he’ll face a serious challenge from the Scotsman Andy Murray. Federer leads the rivalry 14-11, though Murray will have the home court advantage.

You should also keep an eye on Novak Djokovic, who is coming off an elbow injury and can be expected to lay it all on the line this Wimbledon

When the action heats up on the baseline, speed is key, and with Hotspot Shield, you’re in good hands. The company is regularly rated one of the very fastest VPN providers anywhere, which the company has achieved largely thanks to its own data-compression methods.

The company is also easy to set up and use, and has security measures in place to keep you safe while you’re streaming.

NordVPN provides one of the best values in the VPN industry, with plans for as little as $2.75 per month if you sign up for a 3-year-plan and $5.75 per month for a one-year plan. If you’d like to go for a one-month plan just to watch Wimbledon, you can get that done for just $11.95.

Regardless of which plan you use, NordVPN is known for having a quick and easy setup, and very high marks for security. It should be noted though that high security can sometimes affect speed.

NordVPN still does score high for speed, and allows you to set up your VPN on up to 6 devices simultaneously, so if you have to leave the house during one of the matches you can stay glued to your smartphone and never miss a beat.

Cyberghost is easy to set up in just a matter of minutes, no matter your level of familiarity with VPN providers. It also provides you with 24/7 customer service if things start running a bit subpar.

The company makes use of more than 1,000 servers and provides unlimited bandwidth, meaning that the stream should be able to keep up with the match no matter how furious the action gets on the court. One of the better features is that you can always instantly switch to another server if the one you’re on starts running slow.

In addition, you can log on to the service from up to 5 devices at a time.

PrivateVPN has some of the better price points of any VPN service, at only $2.88 per month for a yearly plan, and only $6.57 for a monthly plan if you want to sign up just to watch Wimbledon. You can also earn points when you refer people to the service.

The price is even more appealing when you factor in that you can run the VPN on up to 6 connections at the same time, so there’s no reason you should miss any of the action.

Finally, the company offers top-notch security and a no-logging policy, so you know they take security and privacy seriously.

How to Stream The Championships, Wimbledon

Keep in mind though, that even if you use the VPN to mask your location and reach a website blocked in your country, you may still need to pay to use the site.

The BBC is the host broadcaster of the tournament and issues broadcast rights to dozens of TV networks in countries around the world. In the United States the matches will be shown on ESPN, so you could either use your VPN to go to a server in the UK to watch the tennis action on the BBC, or move to a US server and watch it on ESPN. Check the schedule to see other channels showing the games, and cross-reference that by which servers are running the fastest according to your VPN and you can choose accordingly.

Now that you know how VPNs work, take a look at some of these top providers and decide which one is best for you. With affordable pricing and reliable customer service, they’re pretty risk-free but most importantly, these companies provide a great way for you to make sure you don’t miss any of the action at this year’s Wimbledon.