Home > Articles > How to watch game of thrones with vpn

Game of Thrones Comes to an End: How to Watch it Anytime, Anywhere

“When you play the game of thrones, you win or you die.”  - Cersi

April 14th is a date circled on most people’s calendars, or at least it should be. If you’re a Game of Thrones fan, you already know what we’re talking about. That’s right, it’s the moment we’ve all been waiting for. It's the beginning of the end. The final countdown. The airing of the first episode of the final season of this most-epic-show-ever-created. And it's going to be legendary. 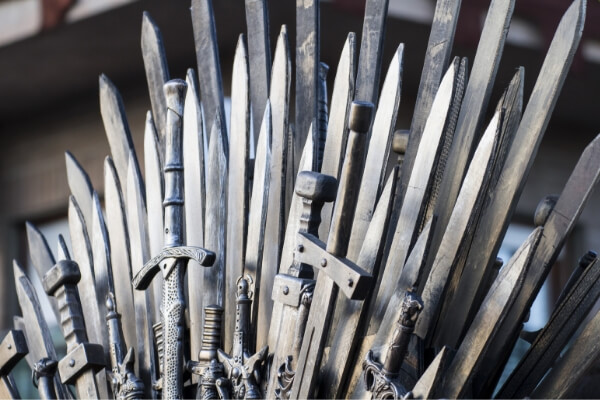 Game of Thrones’ eighth and final season is scheduled to air on April 14th, and millions of fans across the globe are going to be waiting with bated breath to see what will transpire both during the monumental battle that ended last season and what will become of our beloved characters as the episodes count down to the end of the series.

Stuck overseas for a business conference in mid-April? Can't get the streaming to work that night? Don't miss a second of the action. Use a VPN, or you'll never live it down! (Don't know how? We'll show you how to watch Game of Thrones’ final season with a VPN below). But first, find out why this season is going to be so unforgettable.

Season Eight: The Season to End All Seasons

For those of you living in a cave (and we don't mean the Free Folk cave people gathering at Hardhome!), this season kicks off where the last one ended—the night king, riding an ice dragon, destroyed The Wall, leading the invasion of the north by the army of the dead.

HBO put out 3 teasers for the eighth and closing season of the show, and these snippets have left fans ravenous for more details about what is to unfold in the coming episodes. Trailers named Together, Survival, and Aftermath even have some possible spoilers hidden in the background (though you have to have a really good eye to spot them).

Even without spoilers, the teasers have some juicy flashes of excitement to come, including Jon Snow, Sansa Stark, and Arya Stark wandering among fallen bodies at Winterfell, Jon Snow and Sansa Stark locked in an embrace, and Tyrion in a heated argument with Daenerys Targaryen and Sansa Stark over...something!

What You Need to Know About Season 8

We're as excited about this launch as the next Game of Thrones fan, but there are some things you should likely know before you dive into this grand adventure:

These lengths contend with a decent showing of a movie. So, make sure you’ve got plenty of snacks before you sit down, because you’re not going to want to miss a minute.

Like Joffrey, the television gods think that “everyone is mine to torment," but that's just not cool. Here's what we mean. Obviously, you can’t miss out on any of the excitement, so what do you do if your regular streaming channels aren’t available for some reason? You don’t scream bloody murder like Catelyn Stark at the Red Wedding. You just hop onto a reliable VPN and get on with the show.

What is VPN streaming? It’s pretty simple.  If you’ve ever tried to access your regular content from a different location than usual but were told the content is unavailable in your region, you’ve been a victim of geo-blocking. Geo-blocking or geo-restrictions are location-based guards that don’t let you access content from certain areas. For example, if you try to get your Netflix US account running when you’re in Europe, you won’t be able to, thanks to geo-blocking. Universities, businesses, and television studios use these guards to keep content restricted to a certain audience, but we’re fighting back like Ned Stark to the death.

A VPN, or virtual private network, is like a steel reinforced tunnel, nothing goes in, and nothing comes out without permission. You send your requests through the tunnel, and nobody knows who you are, where you're coming from, or what you're asking for.

Let’s say you’re in France during the colossal eighth season premiere. You can’t access your usual streaming channels because they’re being blocked by geo-restrictions. Never fear, justice will be had. Using a VPN, you can tear down The Wall, and lead a counter-attack against those that would dare threaten your freedom of uncensored Game of Thrones viewing.

Much like the Faceless Men who hide behind their victim’s faces, the VPN hides your true location, so the streaming sites don’t know you’re in France. They think you’re back at home as usual. So, they hook you up to the GOT premiere, no questions asked, and you become an expert assassin of all those that stand in the way of your right to view exceptional content!

How to Watch Game of Thrones Final Season With a VPN

If you know even less about VPNs than Jon Snow does about Ygritte, don’t worry. Here’s how to use a virtual private network to access all Game of Thrones episodes (and any other TV shows, audio files, news channels, and other content for that matter):

Make sure you’re using a reliable VPN service like ExpressVPN, NordVPN, or CyberGhost. Why? For one thing, second-rate VPN brands usually throttle you after a certain number of minutes. Imagine getting 45 minutes into the mammoth season premiere and being cut off just as someone sticks a sword into someone else’s throat. That would suck, wouldn’t it? Top brand name VPNs don’t limit your bandwidth or usage, so you can stream the entire episode (and another, and another, and another…) without fear.

Also, if you hate that frustrating buffering bar as much as we do, do yourself a favor and opt for a quality service. VPNs with only a few servers will definitely experience major technical issues on April 14th because their servers just won’t be able to handle the massive demand for streaming on that night. Don’t get stuck without smooth, clear, and fast streaming.

The vast majority of good VPN services have a mobile or desktop app. So, no matter what type of device you’re using or where you are currently, you’ll be able to use your VPN account.

3. Connect to an appropriate server

You need to connect to a server in the right location. If you’re being blocked because you’re outside the US, choose a server that’s in the US. If you don’t know what this means, your best bet is to use the auto-connect setting that most VPNs come with. This will automatically connect you to a server in the right location and based on what you’re using the VPN for. In this case, it’ll optimize the server for streaming.

Go to whatever website you regularly stream shows on. You should be able to log in or stream without a problem. If, for some reason, you're still restricted, try another server or get in touch with your VPN's customer service for assistance.

Side note – ExpressVPN is particularly known for accessing HBO Go, so if this is your streaming channel of choice, opt for ExpressVPN.

Check your calendar and make sure you’re home for the following dates. But if you’re not, use a trusty VPN to stay in the Game of Thrones loop and not miss a minute of the saga:

Varys said it best, “Power resides where men believe it resides. It’s a trick, a shadow on the wall.” Don’t let geo-restrictions stop you from your destiny. Revel in the final frontier, and join millions of other Game of Thrones fans as we all finally get to gaze upon the supreme ruler of the Seven Kingdoms at last

Amanda Bradley's interests and experience stretch from business to tech, via marketing, hi-tech and travel. Amanda uses her research and writing skills, together with her curiosity about every field and industry, to understand each topic from the inside and share it in an engaging, enticing way.